Coins hold a very special place among archaeological finds. They occur in large quantities over the whole area of Roman occupation and provide information about the politics, economy and art of the province. Coins offer a unique opportunity for close dating if it can be established how long after minting the coin was lost. Objects found with them can be dated and it is possible to establish the age of a stratified level in which one is found.

At the time of the conquest in 43 A.D. there was a native coinage flourishing among some of the tribes and a substantial number of Roman republican coins had already been imported and circulated in Britain. The Dobunni (the local British tribe) had minted their own coins at Bagendon. Once the Romans had arrived the conquered tribes were not allowed to continue minting their own coins and the Roman issues became the principal tender. Examples of the earliest system of Roman coinage do not occur in any great quantity in Britain. Throughout most of the first century A.D. the two most commonly used coins were the As and the Denarius. 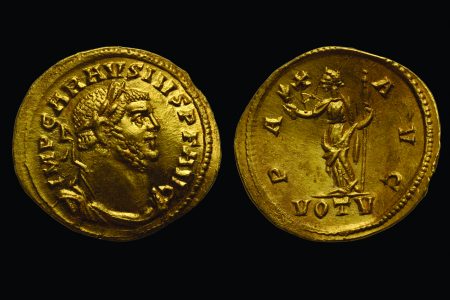 The As was a bronze coin, 16 of which equalled one Denarius. The Denarius was a silver coin. The Denarii minted in the days of the republic were of a particularly high quality. The first major change in Roman coinage came during the reign of the Emperor Augustus. Instead of using just coins of gold, silver and bronze, he struck coins in a new metal which was composed of copper and zinc, as well as others of copper only. There were now 40 gold Aurei struck from one Roman pound weight of gold and 84 silver Denarii struck from one pound of silver. The system of Roman coinage standardised by Augustus can be summarised as follows:

In 64 A.D. Nero devalued the gold Aureus and silver Denarius by increasing the number of coins struck from one pound of metal. The new values were 45 Aurei to the pound and 96 Denarii to the pound. 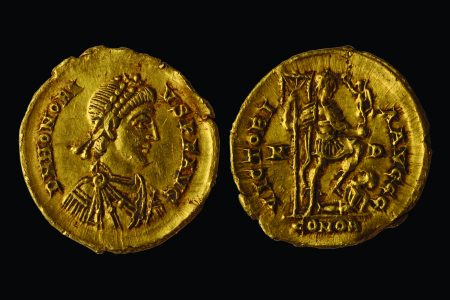 By the mid-third century this neat system of coinage was collapsing and the quality of metal was deteriorating. Another major change occurred at this time when the radiate crown was introduced onto the portraits of the obverse of the coins. These “radiate” coins are very useful to the archaeologist as they were minted for a very short time between 260 and 300 A.D.
Only intermittently during the Roman period did Britain possess its own official mint. For supplies of coinage the country had depended at first on the Republican mint in Rome, where coins were issued by authority of the Senate, and later on the Imperial mints, most notably at Lyons, Trier and Arles. Coins were struck in London for a short period in the fourth century.

In the museum galleries you can see a selection of Roman coins and coins from the Tetbury coin Hoard.