“There is nothing that a woman will not permit herself to do, nothing that she deems shameful, when she encircles her neck with green emeralds and fastens huge pearls to her elongated ears…”Juvenal Satires VI 457

Many rich Roman women owned expensive jewellery. They wore precious stones such as opals, emeralds, diamonds, topaz and pearls set as earrings, bracelets, rings, brooches, necklaces and diadems. Anklets were also sported – though not by respectable matrons! Amongst the wealthy in a busy provincial town like Cirencester there must have been those who could afford to wear such treasures. The numbers of less-expensive pieces found on this and other Roman sites suggest that most people were accustomed to wear jewellery of some kind.

Information about jewellery is gathered from inscriptions and statues as well as excavated material. We also have several references to jewellery in contemporary literature – usually by male satirists complaining about women’s extravagance in this respect. Most precious jewels were imported to Italy from the East at terrific cost and Pliny, amongst others, warned that this was becoming a national economic peril. The Romans prized pearls very highly and they hoped that Britain would become a good supplier. 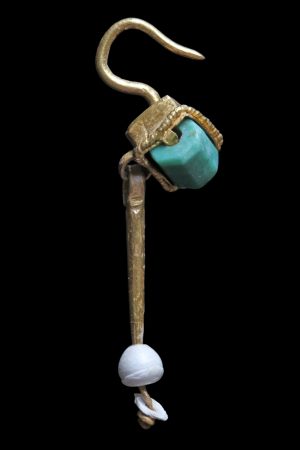 Women loved earrings and there are references stating how their ears became distorted as a result. Pliny says that women spent more on their ears than on any other part of their bodies and continued:

“Women glory in hanging pearls on their fingers and using two or more for a single car-ring … as if they enjoyed the sound and mere rattling together of the pearls; nowadays oven more people covet them – it is a common saying that a pearl is as good as a lackey for a lady when she walks abroad”

Bracelets of bronze, bone and jet are frequently found. These vary in size and design – some plain, some decorated, some of twisted metal. The clasps vary too. Some are bent together at the edges but not fastened, some are riveted, some have a hook and loop and some have quite sophisticated hinges.

Bracelets were also made of shale, a soft material which was quarried and used for jewellery and drinking vessels during the Iron Age. The Romans continued to exploit this material and used it for carving furniture and making jewellery. Children and babies also wore bangles. Bracelets were often buried with the dead and are therefore found as grave goods. 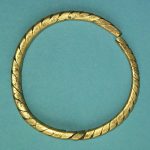 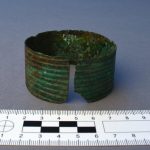 Rings occur frequently on Roman sites and there are many designs and types. Rings were worn by men, women and children. They were made of silver, gold, bronze, iron and jet and sometimes had precious stones and intaglios set in them. Some are plain bands but others have more intricate designs. 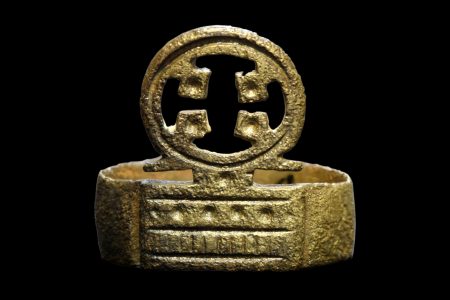 Torques were worn in Britain before the Roman conquest and from epigraphic evidence we know that these continued to be worn by Romans of importance. Chain and bead necklaces were more commonly sported and bead necklaces in particular seem to have been very popular. Occasionally a string of beads included a small charm or amulet to guard the wearer against evil. Heads of glass, coral, shell, jet, ivory and amber are found in all shapes and sizes. The most typical Roman bead was the melon bead. These were made of glass, covered with a turquoise glaze and ridged.