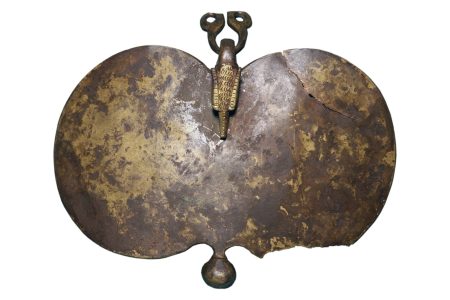 The Roman Army was composed of Legionary and Auxiliary soldiers. Legionaries were recruited entirely from Roman citizens. These could be Italians or any man who inherited Roman citizenship. The legions were highly trained and strictly disciplined – the ‘elite’ of the Roman Army. Each legion was made up of 5,000 to 6,000 men under the command of a legionary commander (Legatus Legions). There were ten cohorts in a legion – nine of 500 men and one of 1,000 men. The cohorts were divided into six centuries of about 80 men each, under the command of a centurion.

Four legions, with auxiliary infantry and cavalry, invaded Britain in 43 A.D. The total expeditionary force must have numbered at least 40,000 men. It was some of these soldiers who came to the site of Corinium in about 45 A.D. There was no settlement here at the time but it was an important road and river crossing. A short distance to the north was Bagendon – the capital of the local British tribe, the Dobunni.

Two tombstones on display in the Museum attest a military presence in Cirencester very early on in the history of the province.

Genialis was probably recruited in lower Germany where the unit is thought to have been until 43A.D. With 20 years military service he is thought to have died about 60A.D. This implies that the Thracians were the first garrison at Cirencester, and the Ala Indiana the second.

This first century A.D. tombstone was found in Watermoor in 1835 about 100 yards south-east of the south gate of Corinium, beside the Roman Ermin Street. The relief shows a mounted soldier, with the face badly worn away. He is riding to the right and brandishing his lance over his fallen enemy. The tomb is carved from local limestone. 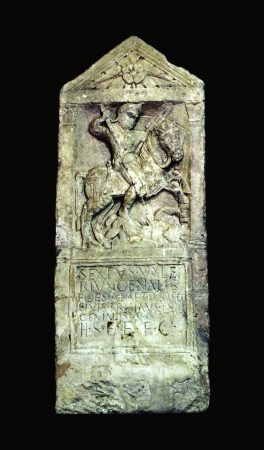 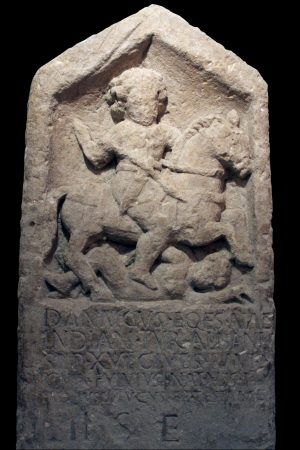 The town of Corinium/Cirencester did not exist before the Roman invasion. However, near to the present site of Cirencester, at Bagendon was a native oppida, a tribal settlement which imported and produced goods and minted its own coinage. When the land of the Dobunni tribe was occupied by the Romans (probably in 43AD or 44) a fort was built a few miles away from Bagendon to guard an important road junction and the crossing of the river Churn. The site of this fort was to become the Roman town of Corinium.

The military occupation was only a temporary phase and the troops were withdrawn about AD 70. The timber buildings demolished to make way for a planned Roman town to be called Corinium Dobunnorum. Corinium was to be the new centre of administration for the tribe of Dobunni. 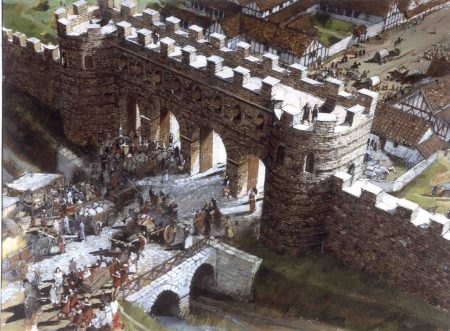 The town was laid out on a grid system of streets creating rectangular blocks of building land called insulae. The central area stood on virtually the same ground as the earlier fort and included a forum or open market place with shops on three sides and on the fourth the basilica or town hall, constructed from local stone on an impressive scale, 104m long with a central aisled hall nearly 25m wide. This housed the administrative offices plus the courts of justice. In the streets around were rows of shops, open to the street and protected only by the colonnades; the shopkeepers lived either above or behind their shops. Elsewhere more elaborate houses stood in their own grounds and represented a different level of society in the town. 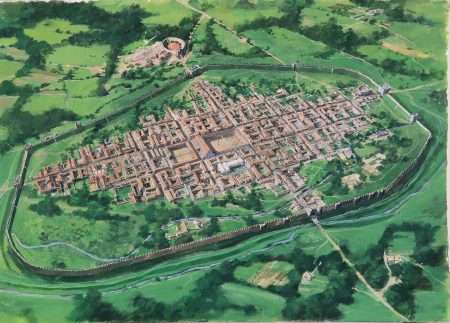 Corinium acted as a market town for the surrounding countryside and the construction of a new market hall shows that the town was prospering. The amphitheatre, a centre for amusements was also constructed; both buildings would have been paid for by donations or from public money. It is likely that inns and public baths also existed, although no evidence has yet been found.

The town was protected by a fortified wall, over two miles in length, which can be seen today in a preserved section in the Abbey grounds. The walls enclosed an area of 240 acres making Corinium the second largest town in Roman Britain. Corinium Dobunnorum was a successful economic and administrative centre for over three centuries and possibly longer, but it too succumbed to the economic and social pressures under which the Roman Empire eventually collapsed.