Food and the Roman Kitchen

In the museum there is a reconstruction of a Romano-British kitchen as it may have looked in about 200 A.D. in the museum. Food was cooked over a charcoal fire on a raised stone hearth. The cooking pots stood on iron tripods or grid-irons. 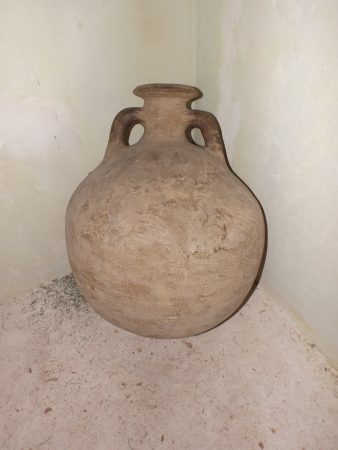 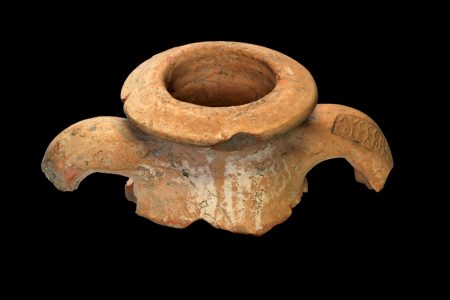 An amphora was a double-handed vessel used for transporting and storing wine and oil. In the kitchen it would have rested in a pit on the earthen floor. Wine and oil would have been poured from amphorae into jugs for more convenient handling at the table. On the table are utensils and pots used in the preparation and serving of food, for example, a platter, bowls and mortaria. A mortarium was a dish with a pouring lip and a roughened inside surface for grinding and crushing food. Most of our evidence for pottery comes from small pieces found during archaeological digs but occasionally whole pots are found including a very large amphora and two beautifully preserved Nene valley ware vessels displaying hunting scenes. 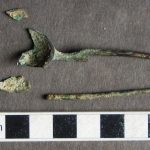 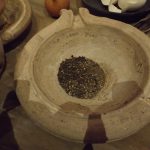 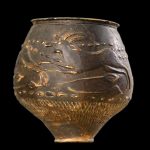 A quern stone was used for grinding corn into flour. Most households would have made their own bread in small clay ovens; others could buy loaves from the local bakery. Honey was used as a sweetener and herbs were used a lot for seasoning.

Favourite Roman foods were fattened snails, dormice, pigeons, shellfish and game. For a typical Roman family, breakfast was a light meal of bread and fruit. The mid-day meal (prandium) was a cold snack or a light dish of fish, eggs and vegetables. Dinner was the main and most elaborate meal consisting of several courses including a sweet course. Vegetables were eaten a lot and were often served as a stew. Oysters were very popular and special spoons were made with pointed handles for eating them. There are several oyster spoons on display in the museum galleries.