The design of men and women’s dress in Roman Britain required that the garments were fastened with brooches. The brooch made out of a single piece of metal, like a safety-pin, had developed in pre-Roman Britain and was worn during the Iron Age. More than 70 such brooches were excavated at Bagendon, the Iron Age capital outside Cirencester.

The Romans introduced several new types of brooch from the continent, e.g. the Thistle brooch and the Aucissa brooch. Thereafter, these were copied, modified and new forms invented locally. The native styles persisted most strongly in the first two centuries after the Roman invasion. Throughout 3rd and 4th centuries – from about 200 A.D. – the British industry appears to have declined and continental types predominated.

Romano-British brooches have been classified (see bibliography) and the different groups dated by association with coins and pottery. They consequently have a certain value as dating evidence. There are many varieties of brooch: spring and hinged brooches; bow and plate brooches; plain and decorated brooches. Some are enameled very beautifully. 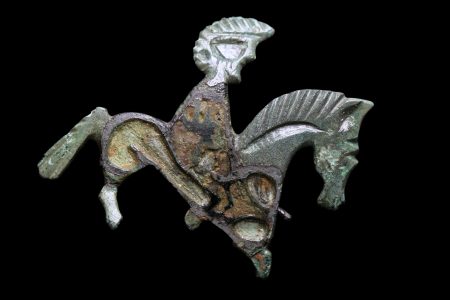 The Plain “safety-pin” type brooch was common in Roman Britain, as it was in the preceding Iron Age period. Several were found at Bagendon near Cirencester. These brooches comprise a single piece of metal coiled round to give a spring and flattened at one end to make a catch plate. The Penannular brooch was fairly common in Roman
Britain and like the plain fibula was known in the Iron Age. Originally the Penannular brooch was completely plain. Later, from the late second century, the terminals were decorated, often with zoomorphic designs. 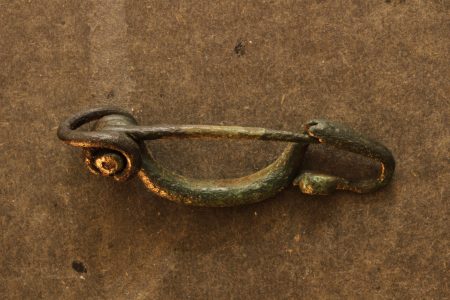 The Thistle brooch was, by origin, a continental type. It is associated mainly with the period of the Claudian conquest in 43 A.D. and derived from Gallic and German types. Characteristically it has a broad ribbed bow and flat tail separated by a circular or lozenge-shaped plate. 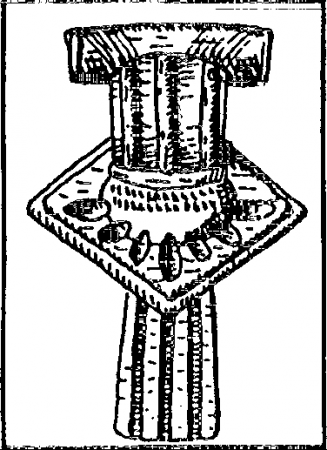 Aucissa brooches probably came from Gaul in the early first century and first appear in Britain after the invasion of 43 A.D. They are found mainly in military area. The brooches have a hinged pin and a high, semi-circular bow. ‘Mere is a catch plate and at the other end a flat plate dividing the bow from the hinge. This plate bears the makers name ‘Aucissa’ (or sometimes ‘Atgivios’).

The Fantail and Bow Brooches

Both these brooch types developed from the thistle brooch. The strong ribbed decoration was modified and the plate disappeared. They date from the late first century to the mid-second century.

The Crossbow or P-shaped brooch appeared in Britain in the third century A.D. It was a common type on the continent throughout the Roman period. This type is easily identified by the high bow and the long straight tail and seems to have been worn as a symbol of rank in the Roman army and civil service.

This brooch appeared in the late first century and lasted until the end of the second century A.D. It is a stout-looking brooch and there is usually a strip of ornament along the top of the bow. The bow is almost semi-circular and the foot is moulded into a knob. At the head is a stud – often enameled. Sometimes there is a head loop – through which a chain could have been tied.

The Trumpet brooch is one of the best known Romano-British brooches and is rarely found outside Britain. It developed in the military area of the province in the late first century A.D. and was most popular in the early second century. It is called Trumpet brooch because the head of the bow ‘opens out’ to resemble the mouth-piece of a trumpet.

Pins have been found in large numbers on Romano-British sites and the implication is that they were used very widely. From Cirencester we have many examples of bronze and bone pins. Elsewhere there are fine pins of jet and silver and some with pearl heads, (e.g. from York). The pins were fashioned as personal ornaments. The shorter plain pins, with round ends, were probably used as alternatives to brooches for securing garments. The more elaborate, elegant bone examples were most probably used as hair pins. There are an infinite variety of designs. 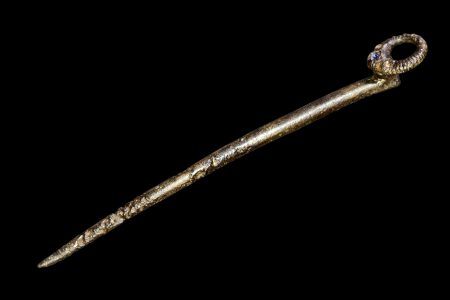