Mosaics are among the most attractive works of art to have survived from the Roman period, and Britain has produced nearly 800 examples – many of great skill and beauty. They have great value both as works of art and as social and economic documents. In the Roman world the full expression of the wealth of a Roman citizen lay in the quality and number of mosaic floors in his house, and the style of a pavement tells us something of popular taste. The pavements from Cirencester form one of the finest collections of mosaics known from Roman Britain. Over 90 tessellated (mosaic) pavements have been discovered from Roman Corinium.

Mosaic making appears to have spread to the Western Roman Empire from Greek lands. In Phrygia (modern Turkey) a mosaic has been found that dates back to the eighth century B.C. but the earliest wave of activity seems to have been in Greece in the fourth and third centuries B.C. At this time small black and white natural pebbles were used to construct patterns and pictures, with the use of colour being rare. By the second century B.C. the practice had begun of using small, specially hand-cut pieces of stone, marble, clay and glass, which considerably extended the scope of the mosaicist. These small pieces were called ‘tesserae’ or ‘tessellae’ and were usually cubes of approximately a centimetre square. 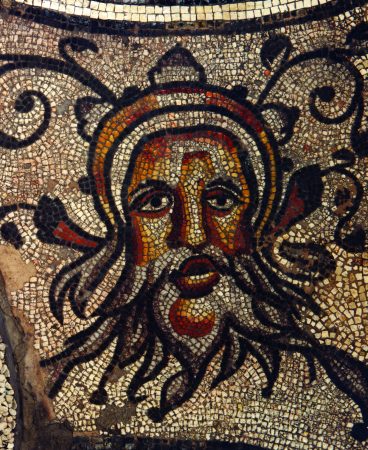 The art of laying tessellated floors was called `Opus Tessallatum’. Correctly this term applied to all floors in small, cut pieces. Floors laid in coarse tesserae of one colour were put down in poor houses or in the less important rooms of finer buildings and this work was call ‘Opus Signinum’. The patterned mosaic work, like that on display in the Museum, was known as ‘Opus Vermiculatum’.

The task of cutting tesserae probably took place in the stonemasons’ workshop – though it might also be done at the site of the new floor. The tesserae were carried about in large double trays. The mosaicist would make the tesserae out of whatever materials were locally available. In Britain, materials were rarely `imported’ for this purpose, although occasionally, where quantities of marble or glass were brought in for building or sculpture, chippings and wasters might have been used in the floor. From Roman Britain there are examples of black-and-white and polychrome designs. Different raw materials gave the various shades required.

Glass was used only rarely in Britain. Notice on the Hare Mosaic the few clear glass tesserae on the hare’s back and red glass used on the legs of Actaeon on the Seasons Mosaic. 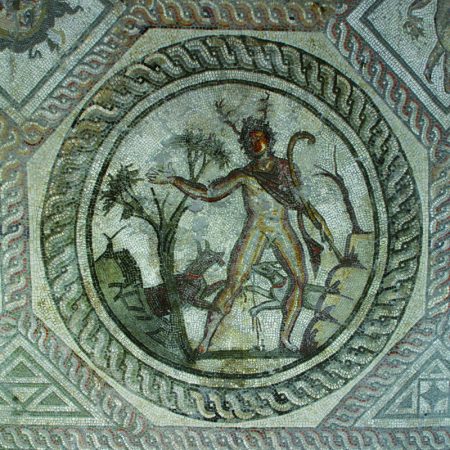 The technique of mosaic production was a laborious one. The design was chosen and the number of tesserae required was calculated and made in the right size, shape and colour. It was essential that each mosaic should be well drained and it was for this reason that, wherever possible, the pavement was placed over a hypocaust system. When there was no hypercaust a suitable foundation of sand, gravel or rubble had to be constructed. The thickness of this would depend on the nature of the subsoil. A mortar bed was then prepared and spread over the foundation. The tesserae were set out carefully, using rules and setsquares, and pressed down into the cement while it was still slightly wet. The mosaic was then rolled and polished.

The designs on the mosaic floors, whether figured or geometric, show a remarkable uniformity throughout the Roman world, with the same themes and motifs occurring again and again. To some extent this can be explained by the mobility of craftsmen taking their ideas from place to place with them. It can also be accounted for by the circulation of pattern books. These consisted of sheets of parchment or thin wooden boards, since perished, which carried designs available to the client, from which the craftsmen might work. The books provided models and suggestions to the customer and seem not to have been intended for slavish copying, thus allowing considerable scope for individual taste and imagination. 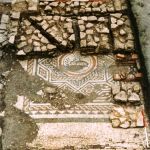 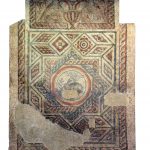 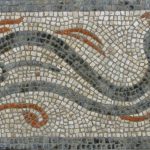 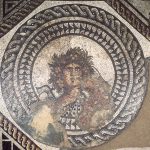 Mosaic making was unknown in Britain before the Roman Conquest. It was by origin an entirely Mediterranean form of art. On stylistic grounds the few early pavements in Britain can be attributed to foreign craftsmen. In the early stages these foreigners, some possibly Greeks, who had been trained in Mediterranean workshops, travelled to Britain to lay floors in the new province as required. Even during the fourth century it is possible that the more competent mosaics were laid by continental craftsmen.

By the late second century there was an increasing demand for mosaics from the new towns and country houses and during this time foreign craftsmen and local apprentices probably worked together. In Cirencester it had long been thought that we have evidence of this ‘collaboration’ on the second century Seasons Mosaic. It has been observed that the head of Spring is drawn with harder and heavier lines that those of Summer or Autumn and lacks the skillful shading and modelling of the others. It is obviously the work of a loss gifted craftsman. 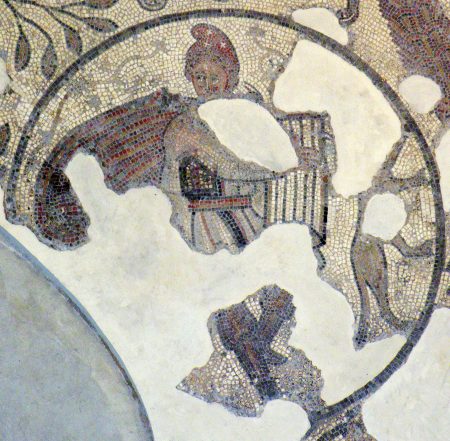 As the art spread in Britain the craftsmen became organised into local ‘schools’ – based in regional centres and serving the surrounding areas. Each workshop would have specialised in certain designs and had its own repertoire. One such school is thought to have existed in Colchester and St. Albans as early as the second century A.D. but they became easier to distinguish during the fourth century. From about 300 A.D. there was a terrific boom in the industry with a growing market in the expanding towns and the rich villas.

On stylistic grounds as many as 10 schools have been identified in such towns as Durnovaria (Dorchester), Durobrivae (Water Newton), Peturia (Brough-on-Humber) and Corinium (Cirencester). The Corinian School, based here in Cirencester, was probably the largest, and many mosaics have been assigned to it, mostly from Gloucestershire and from Cirencester itself. Recurring subjects and motifs can be observed, the Orpheus theme, for example, as excavated from Barton Farm, Cirencester, and also from neighbouring Woodchester.

Imagery on mosaics provides information about Roman life and culture and might include religious and mythical figures, clothing, everyday tasks and popular symbols and decoration.