Remembrance of things past – Treasures from the Corinium Museum Archive

Robert Heaven is a born and bred Cirencester man with an interest in 19th and 20th Century Social History. Educated first at Cirencester School and later at Sussex University and Birkbeck London, he specialises in Popular Culture as depicted in the press and other media. He writes the “Nostalgia” page for the Wilts and Gloucestershire Standard each week and is the convenor of the OldCiren group on Social Media.

Looking through the wonderful Corinium Museum archive of photographs recently, I came across several photos of shops that were once important suppliers of what stocked the larders of Cirencester people (and fridges for those that owned them).

The pictures today are from the Corinium Museum’s photographic archive and show shops in Cricklade Street that are no longer there; made redundant by large supermarkets and changing shopping habits.

Who can remember when food shopping had to be done several times a week? Tinned food was easily obtained and could be stored in the kitchen pantry, but meat, fish, bread and to some extent vegetables. All had to be bought fresh and carried home.

Cirencester once had many food shops, especially in the Market Place area and down Cricklade Street. My Mother was loyal to the Wheeler’s Grocery Stores at the junction of Cricklade Street with Ashcroft Road. This was handy for the fish shop and the butchers which were all just a few yards from the door of the Grocers. 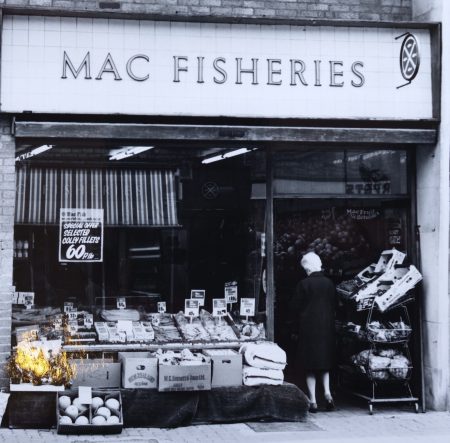 Mac Fisheries in Cricklade Street was where my Mother would buy what she called “Yellow Fish” on a Friday (Smoked Cod) to be later poached in milk for tea. Sometimes she would also buy a pound of Sprats for Saturday lunch having supplemented them with a tinned loaf from Topps Bakers next door to Mac Fisheries. 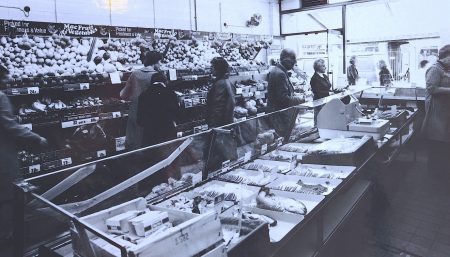 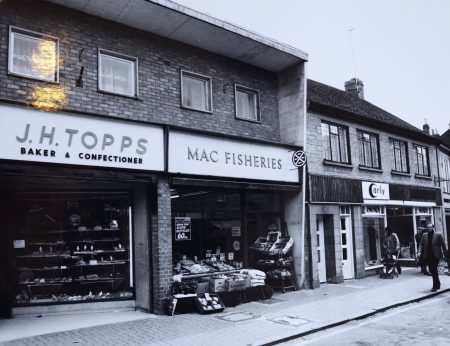 Mac Fisheries Fish and Game Co (later shortened to just Mac Fisheries) in Cricklade Street was listed in the Bailey and Woods directory of 1940 with a telephone number of Cirencester “72”. They had a telephone, but did not deliver. Other shops did though – Charlie Barnett’s fish and Game shop which for many years occupied a corner of the market place, had a delivery bike which was ridden for 40 years by Mrs Nancy Rogers, who it was claimed was the first delivery girl in Cirencester.

Mac Fisheries was founded by Lord Leverhulme at the end of the first world war and served housewives right through the war years and the rationing of the 1950’. In April 1979, due to a sell out to International Stores, all the wet fish shops were simply closed down within three months. The Corinium Museum photos date from 1977.