Rural Life in the Cotswolds

Our recent Behind the Scenes tour focused upon the rural life collection and more specifically on the crafts associated with straw. This gave me the excuse to go through the collection and pick out some things with some fabulous names. The inventory for our rural life collection is full of some wonderful specialist words that when reeled off sound almost poetic: a Whippletree, some froes, a barley hummeler and a monkey pole. You may recognise the tool in this harvester’s right hand as some kind of sickle, but would you be able to name the tool in his left as a pick thank or fagging hook? 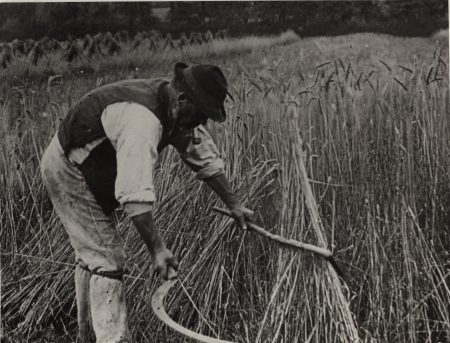 We have many objects in the reserve collections connected with thatching. Much of the material we have comes from the North of the Cotswolds, for example this picture of thatched houses in Ebrington, near Chipping Campden. 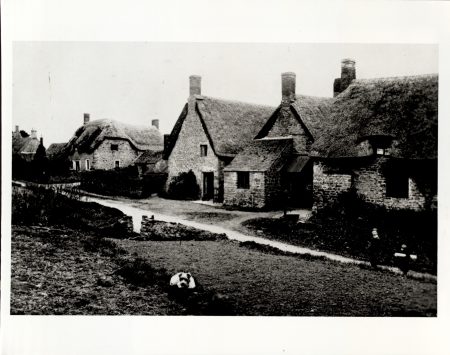 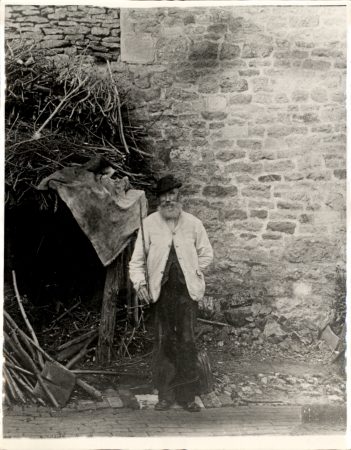 Thatching has changed little since the Middle Ages. In fact, once, most parish churches throughout Britain were thatched; restorations and rebuilding, down through the centuries, removed most of these roofs – but there are still over a hundred in East Anglia. If you ever see a house with what look like buttresses on its sides, it could be that they were added when the roof went from thatch to tiles. Tiles are much heavier and caused the walls, built for thatch, to buckle. There was a picturesque resurgence in thatching in the Regency period just when thatch ceased to be the cheapest form of roofing. This was due to the 1820’s welsh slate boom and the French wars which raised wheat prices – leading to use of Norfolk reed for thatching across the country. The 1st world war left many thatching families without heirs and some old thatchers worked until they dropped. However, thatcher’s who liked their cider seemed to suffer least when falling off roofs. The cider connection went deep, especially as straw was being used in the cider-making process; being put between layers of apples when they were squeezed in the press. There was also a cider related Thatcher’s call: “Reed, Spars, Cyder jar, Boy & all, Bring me last what I first called”.

During the winter months, thatchers and their families could still make money using straw. It could be turned into bee skeps using straw twisted into ropes with a wimble and the coils of straw would be sewn together using strips of briar. In return the bee keepers could give the beeswax to the thatcher to waterproof the twine they used in thatching roofs (before the use of tarred twine became prevalent).

Here we have a pre-1934 picture of Sarah Thrussell (1842 – 1934) plaiting straw. Straw was plaited and turned into ornaments for hay ricks. In fact twisted straw was used as rope to bind hay ricks during their thatching – something that house thatchers were also involve with. 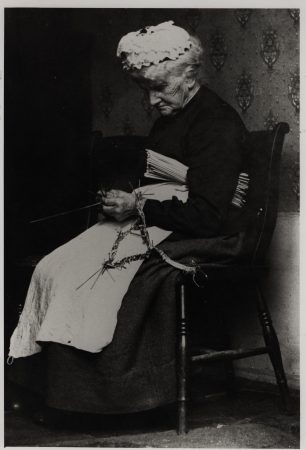 Rick ornaments took various forms – a cockerel, a bird, a cross, a crown, an apple, or a “churn”. These were usually secured by an ash-pole to the apex or the gable end of the hay rick. We have one example of a rick ornament in the reserve collection which came from Mr C.E.Curtis of Bisley. 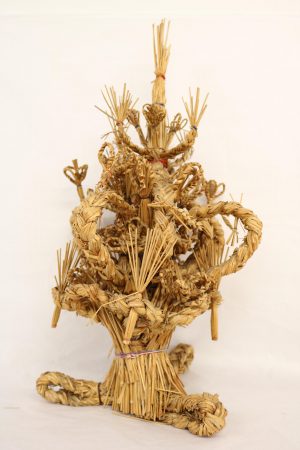