Tales from the Stores: Mad as a Hatter

Home Blog Tales from the Stores: Mad as a Hatter

There is something about a museum’s store room that I find faintly magical. Perhaps it is the thought of a collection of objects kept hidden away, rarely seeing the light, or maybe it is the anticipation of opening a box and finding something special. Anyway, it is that adventure I went on when trying to gather objects for a talk I was giving about the museum’s costume collection. A little lateral thinking took me from the costume store, with its smocks and wedding dresses, to the social history store, and a bay containing some objects associated with tailoring. There I found this… 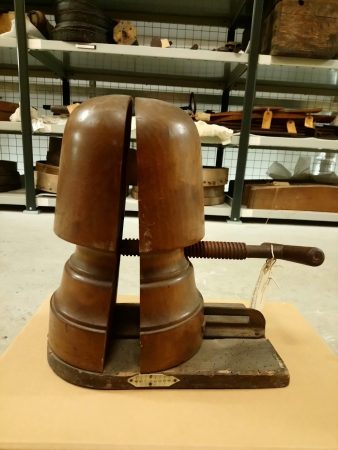 I may seem eccentric but I found it both a pleasing thing and an intriguing inclusion in my talk. Guessed what it is yet? It’s an adjustable hatter’s work stand. A hatter would form the hat around the adjustable ‘head’. Using the iron screw to adjust the head size and the white scale on its base – 60-67 – as a measure.

Being intrigued I went back to consult the cataloguing records and discovered that it had come to the museum in a collection of items from Clappens Ltd. Cricklade Street, Cirencester. More than that, I found further objects and photographs associated with that business. We have some of the shop’s ledgers and some shop signage. This was donated by TSB when they moved into the building; after which it was Ottakar’s and now Waterstones Bookshop.

With these bits of detail I went off on a short journey into the past.

Clappens Ltd was a ‘Country Outfitter’ offering ‘High Class Tailoring at moderate prices’. According to a turn of the century advert, it supplied ‘Hard Wear Tweed suits, Eton Suits, Rugs, Stiff Felt Hats, Caps, Day Shirts, Pyjamas, Dressing Gowns, School Boots etc.’ The shop must have been quite a fixture of Cricklade Street and thrived in the nineteenth century. According to a relatively recent article in the Swindon Advertiser, the Clappen family retail empire grew into both old and new town in Swindon. The shop in Cirencester lasted into the 1960’s.

You can see from this late nineteenth century postcard where Clappens ltd would have been – just next to the building with the ivy. 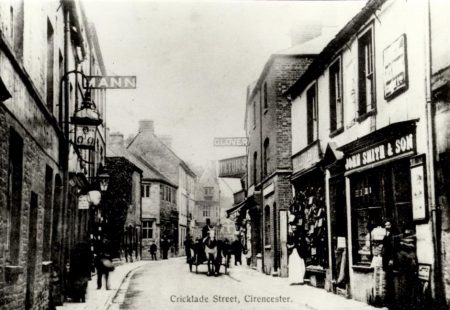 Not the clearest image of the shop but we do have a photograph of one of Clappens’ window displays. This next photograph is of Clappens’ shop window and comes from the Second World War. 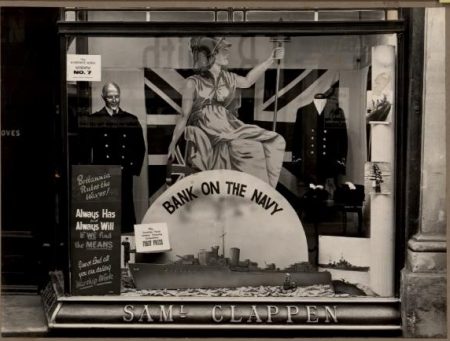 The donor told us that it was dressed for a competition during Warship Week and won first prize. Warship Weeks were British National savings campaigns during the Second World War, with the aim of a Royal Navy warship being adopted by a civil community. You can imagine the retail community in Cirencester embracing such a scheme as part of the war effort.

See what happens when you open a box in a museum store room, it takes you on quite a journey into the local past.