Emily has been volunteering with various projects at the museum for about two years, while studying Classics and English at university. These are her eloquent and fascinating thoughts on her time here at Corinium Museum.

Between terms of a very literary degree, it’s really nice to be able to work with material remains. The objects I often love the most are the ones which have obviously been regularly handled – coins worn smooth, axe-heads carefully polished – and remind you that they once played a real and useful part in a person’s life; or ones which reveal tiny, human details in those lives: burnt hazelnut shells buried in a waste pit along with coal fragments, perhaps thrown into fires while stories were told; matching brooches of different sizes, smaller ones to clasp light, summer cloaks, and thicker ones for winter; four seemingly idly-placed finger-marks set in clay, the ragged lines of which tell us the bronze-age man who made them bit his nails. I also love looking at objects closely associated with the history of Cirencester itself: perhaps my favourite of the donated objects I have seen was a box of stereograph pictures of the town, which I loved sorting through, and seeing the marketplace just minutes from my house crowded with horses and carriages, but otherwise almost unchanged. Getting to handle and to care for these objects has been so exciting! 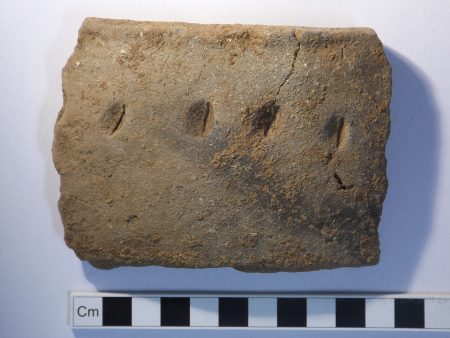 It’s been really interesting, too, to learn about how the museum itself is taken care of. My most fascinatingly disgusting task so far has been checking and replacing all the archive rooms’ pest traps, and researching and recording the insects sticking to them, which I found a surprisingly gripping subject. Carpet beetles, for example, can never fully retract their wings once they fly for the first time, so if they’re still wholly enclosed in their cases, you know that they were born in the room you’ve found them in. (Learning, moreover, that, unlike anything else, dead spiders gradually entirely disintegrate into splayed, gritty lumps of dried spider-dust – like vampires after they’ve been staked – was thrilling and haunting in not-quite-equal measure.)

This particular job was also a delightful opportunity to explore to the very corners of the top-floor archive rooms, which are deliciously warren-like, if you like that sort of thing. The top store is perhaps my favourite room. There are no windows, and the lack of natural light means you end up measuring time by how many shelves you’ve worked through, or how many boxes you’ve made, or how hungry or (the room is carefully temperature-controlled) cold you have become; and the packed shelves, tight corners and tilted ceilings make every visit feel a little like an illicit adventure to an eccentric’s attic. There also is an almost-complete, partly-reassembled dog’s skeleton laid out on a table in this room, who I can’t help but smile at every time I walk past. The tasks I do here vary, but usually involve organising and protecting the artefacts stored here: matching boxes to the objects to keep them safe, making tissue paper nests, making or replacing labels (I have found laminating to be strangely deeply satisfying), and rearranging the boxes on the shelves to make them easier to find, or sometimes just so we can squeeze more in. 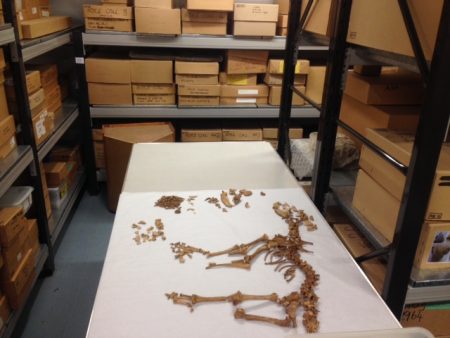 Dog skeleton – awaiting conservation before going on display in the new Stone Age to Corinium galleries.

I’ve also been involved with cultivating the huge yet very incomplete database of all the museum’s objects, which is updated with every find and donation; information needs compiling from various sources, such as the archaeologists’ reports and the site handbooks, and photos need taking and uploading. Most recently I’ve been updating the museum’s human remains register, checking it against our artefacts database and the reports from excavations and making sure all the useful information is included and correct. Although it does sometimes take an entire box of paperwork to say ‘nothing was found here’, interesting details often crop up if you keep an eye out for them while you’re rifling through the files; last week I enjoyed reading that what we now know to be a Romano-British coffin was for a time used as a water-trough for the horses in the field where it had been buried.

I’m also often called to take on any odd jobs that need doing – carrying a life-size model pig’s head through the museum to return it to the Roman butcher, for example, or running upstairs to guillotine handfuls of colourful paper in time for children to glue lolly sticks onto them, or looking through a Roman recipe book to find fun facts about the cooking of hares and snails, or, when there’s nothing else for it, doing piles and piles of filing. 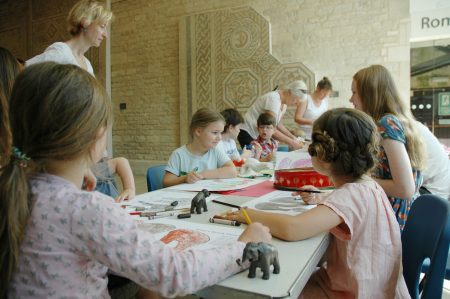 I’ve also really, really enjoyed helping with family crafting activities. The children who come to them are always so creative, all having different ideas and playing really inventively on the examples I give them, often having much better ideas than me, and they all throw so much of their personality into the different things they make. I especially like it when the same children come to several activities, and I can get to know them a little, and sometimes even see them become gradually less shy of me, which is really heart-warming; I love that the museum is so welcoming and friendly, and that children (and grownups!) are so happy to join in with the activities, and to chat about what they’re learning; and I love chatting to the staff and the other volunteers about what they’re working on (or absolutely anything else) – I’ll genuinely miss being here if I ever stop volunteering, and I hope they let me stick around for at least a few more years!