Volunteering as an Education Assistant

Hi, my name is Martin Richardson, I’m 17 years old and I am a 1st year at Cirencester College. I have completed an EDGE work experience placement at the Corinium Museum in Cirencester. I am currently doing the role of education assistant which was advertised on the Corinium Volunteer Makers site.  The placement is helping me fulfil a part of my Gold DofE, the volunteering scheme. This entails me doing at least 1 hour of volunteering a week for 18 months.

2018 is the Year of Engineering and this has been the focus of my placement at the Corinium Museum. I have done many tasks which revolve around engineering and how it was applied specifically in the Roman era. I have done research throughout the museum, looking at the collection and what is on show. This included the hypocaust system, the Roman amphitheatre, the forum, farming and housing. This was a starting point on how I developed my understanding on Roman engineering. 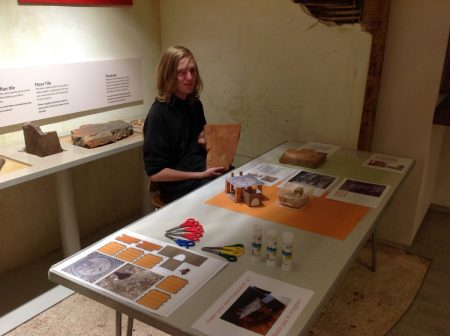 One thing that has come from my time volunteering is a discovery table plan to be based around the Roman house, specifically the hypocaust system. The table had 2 parts to it: physical parts of a hypocaust and a foldable hypocaust model. The physical parts were a box-flue tile, pilae and some tesserae. These would have all been necessary for a hypocaust – whether it was structural, aesthetical or the inner workings. The foldable hypocaust was an activity designed for children to purchase and then do at home. It required them to cut out different parts of a hypocaust and then fold and stick them together to produce a mini hypocaust model. This was designed by me, via Photoshop, from June to August. It incorporated many features which a hypocaust had including the tubuli, stoke room and pilae. I used an image of a pilae to provide texturing for the pilae in the model as well as the tubuli. The top floor, to represent the Roman house was an image of the hunting dog’s mosaic so that people can link it to the museum where the mosaic is on display. 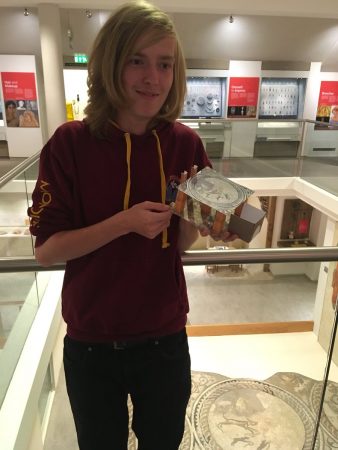 Over Easter I developed a trail for people to follow. It was based around engineering in the Roman era. It looked at many different aspects, some being more related to my previous research and some being more trivial and out there. I produced the questions and answer sheets on both publisher and PowerPoint where I then printed them off and laminated them to be used in the museum for later dates. It looked at many features of roman including the home, amenities, water, and fighting. Each question had its answer on another sheet which was positioned in the museum for people to find. This allowed children to go round the museum with an interest to find the answers to the questions of the trail.

I have also been observing education sessions where schools come in for sessions where they are taught by those who work for the Corinium Museum. This is to help me develop my understanding of what children in KS2 use to learn. Then with all the data which I have compiled I’m hoping to produce a form of web resource which schools could use to educate their students about Roman engineering.

I am enjoying the placement in the museum. Everyone in the offices has a smile on their face and it just always lightens the mood. I am also enjoying the constant learning which I personally gain through my research. It is always a positive when I learn new things about anything. And… there are also the biscuits in the kitchen…highly recommended!